In this new version, we focus on improving the dependency package management of xmake, adding support for the pacman package manager under Archlinux and MSYS2/Mingw, and we have further enriched the official package repository of xmake [xmake-repo](https: //github.com/xmake-io/xmake-repo), more than 50 commonly used C/C++ packages have been added.

In addition, we have added an independent subcommand based on xmake: xrepo, a complete and independent cross-platform C/C++ package manager, which is convenient for users Conveniently manage the installation and integrated use of daily C/C++ packages.

At the same time, we have also released the xrepo related site xrepo.xmake.io, we can quickly check the usage of xrepo and each package in the official xmake-repo repository. Support and usage of

xrepo is a cross-platform C/C++ package manager based on Xmake.

It is based on the runtime provided by xmake, but it is a complete and independent package management program. Compared with package managers such as vcpkg/homebrew, xrepo can provide C/C++ packages for more platforms and architectures at the same time.

And it also supports multi-version semantic selection. In addition, it is also a decentralized distributed warehouse. It not only provides the official xmake-repo warehouse, It also supports users to build multiple private warehouses.

At the same time, xrepo also supports installing packages from third-party package managers such as vcpkg/homebrew/conan, and provides unified and consistent library link information to facilitate integration and docking with third-party projects.

If you want to know more, please refer to: online documentation, [Github](https://github.com/xmake-io /xrepo) and Gitee

We have configured two dependency packages above: zlib, openssl, and then we switch to the cross-compilation environment and use the compilation tool chain on musl.cc to compile.

xmake will automatically pull the zlib/openssl source code package, and then use the arm-linux-musleabi-cross cross tool chain to compile and install zlib and openssl. After the installation is complete, it will be automatically integrated into the test project to participate in the link until it is fully compiled.

Of course, to make C/C++ support cross-compilation, you first need to maintain the official xmake-repo repository and increase the support for cross-compilation. At present, there are not many C/C++ packages that support crossover in the warehouse, but many have already been included, and they will continue to be expanded in the future.

We can also use the xrepo command provided in the new version to directly retrieve the packages supported by the specified platform (support fuzzy query):

We also welcome everyone to help contribute more packages to the official repository of xmake-repo, and work together to improve the construction of the C/C++ package management ecosystem so that users can It is more convenient to use various dependency packages, and no longer be bothered by various tedious porting tasks.

Taking into account the different licenses of the packages in the warehouse, some packages may conflict with the license of the user project after use, so xmake adds a package dependency license compatibility detection mechanism in the new version.

And a new set_license interface is added, allowing users to set the license of each target.

For example, we integrated a LGPL-2.0 package libplist library, but our project does not have any license settings.

When compiling, there will be the following prompt to warn users that there may be a risk of code license conflict when using libplist.

we can use shared libraries with LGPL-2.1 or use set_license()/set_policy() to modify/disable license!

And if we explicitly pass the project through set_license("LGPL-2.0") to ensure full compatibility, there will be no warning messages, and for GPL-related licenses, xmake will also have corresponding detections.

The relatively loose license packages such as MIT, BSD, etc., are directly integrated and used without any warning.

In addition, if we explicitly set set_license() and the package license conflicts, we will also prompt a warning.

In the previous version, xmake already supports the automatic integration of third-party warehouse package sources such as vcpkg, conan, clib, homebrew, etc. In the new version, we have added support for the integration of packages managed by pacman.

To install the mingw package on msys2, you need to specify the mingw platform:

Install any version of the package

Because the packages in the xmake-repo warehouse have a strict version list and the corresponding sha256 value for the integrity check of the download, this will ensure the reliability and integrity of the package download.

However, it also leads to the inability to fully include all versions of a package. If there is a required version that has not been included, one way is for the user to add pr to the xmake-repo repository to increase the support for the corresponding version.

Another way is to configure {verify = false} in xmake.lua to force the skip verification mechanism, so that you can choose to download any version of the package.

Regarding the dependency integration of the vcpkg package, a lot of improvements have been made in the new version. Not only has the switch support for the windows-static-md package been added, but we have also improved the automatic detection mechanism of the vcpkg command, making it possible in more scenarios It can be detected automatically instead of requiring manual configuration.

In the new version, we continue to make improvements to the custom tool chain to make the automatic detection more intelligent. Usually only need to specify sdkdir, xmake can automatically detect other configurations, such as cross and other information, for example:

This is the most streamlined cross-toolchain configuration. It only sets the corresponding SDK path, and then marks it as a complete and independent toolchain by set_kind("standalone").

At this time, we can use the command line --toolchain=my_toolchain to manually switch to this toolchain.

In addition, we can also directly bind it to the corresponding target through set_toolchains in xmake.lua, then only when this target is compiled, will we switch to our custom toolchain.

In this way, we no longer need to switch the toolchain manually, just execute xmake and it will automatically switch to the my_toolchain toolchain by default.

This is especially useful for embedded development, because there are many cross-compilation tool chains for embedded platforms, and we often need various switches to complete the compilation of different platforms.

Therefore, we can place all toolchain definitions in a separate lua file to define, for example:

Then, we only need to import them through includes in xmake.lua, and bind different tool chains according to different custom platforms:

In this way, we can quickly switch the designated platform when compiling to automatically switch the corresponding tool chain.

If some cross-compilation toolchains are complex in structure and automatic detection is not enough, you can use set_toolset, set_cross and set_bindir interfaces according to the actual situation to configure other settings in a targeted manner.

For example, in the following example, we also added some cxflags/ldflags and the built-in system library links.

For more examples of custom toolchains, you can refer to the built-in toolchain definition in the directory of xmake source code: [Internal Toolchain List](https://github.com/xmake-io/xmake/blob/master/xmake/ toolchains/)

In the new version, we have also made further improvements to it, adding cross-platform mouse operations. We can use the mouse to click and select various configuration items, which is more convenient. 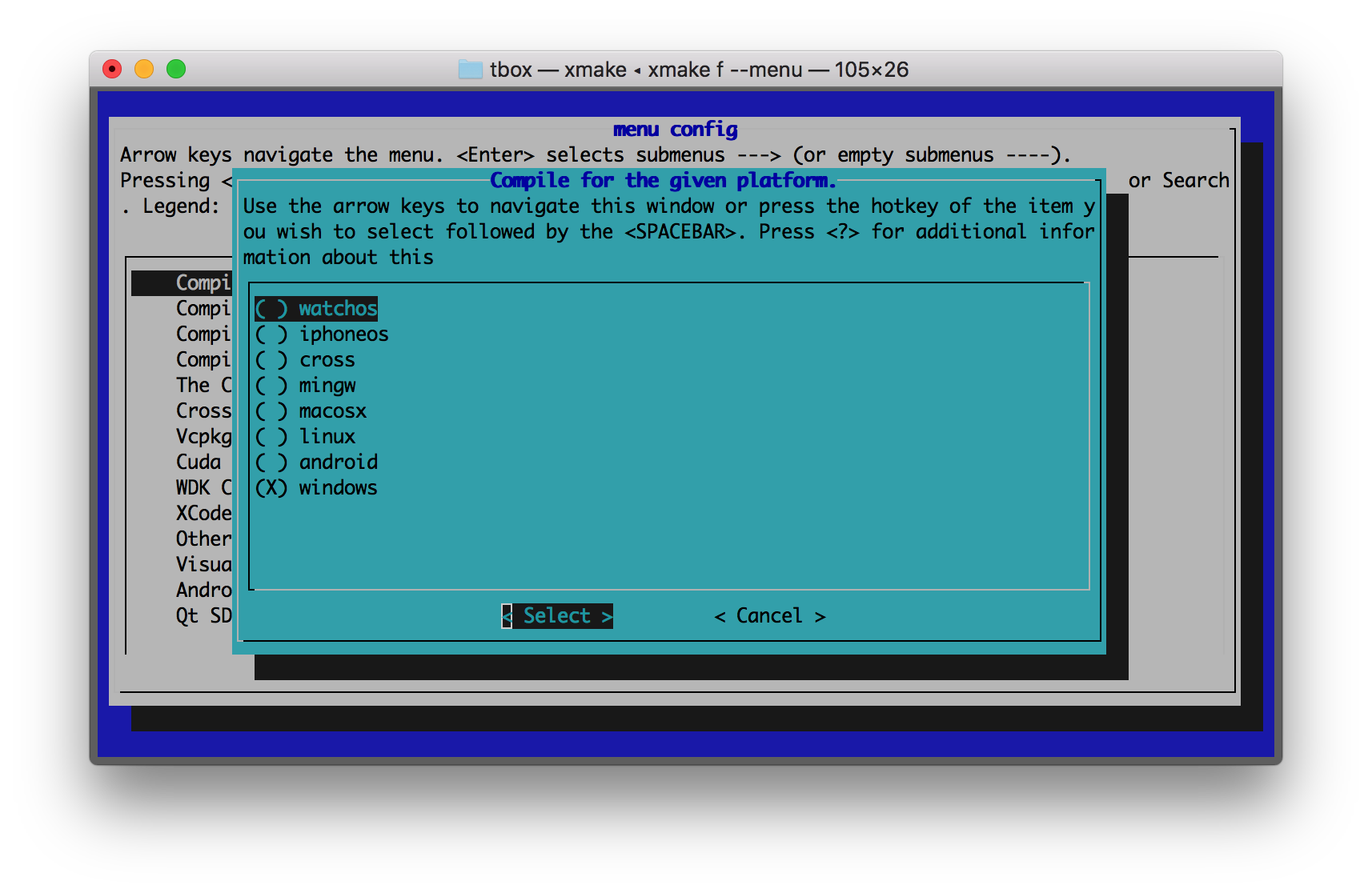