Published on September 5, 2019 by Erick Lavoie

Dear backers and Scuttlers of all horizons, the community has been quite busy in August! Here is a summary!

Zenna, Daan, Dominic, and a whole bunch of Scuttlers participated in CCCamp 2019 this year, which happens only every four years. A number of talks are already online. You can find a report on the event on the Redecentralize Digest. Secure-Scuttlebutt had its own space in the camp: the following picture shows the pre-event plan (SSB is in the pointy end of the middle triangle on the right). 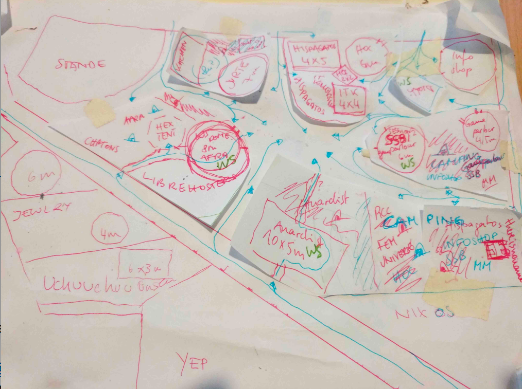 There was a general policy against taking pictures at CCCamp, but Zenna did manage to capture Dominic in a deep reflection session! He agreed to share it with you: 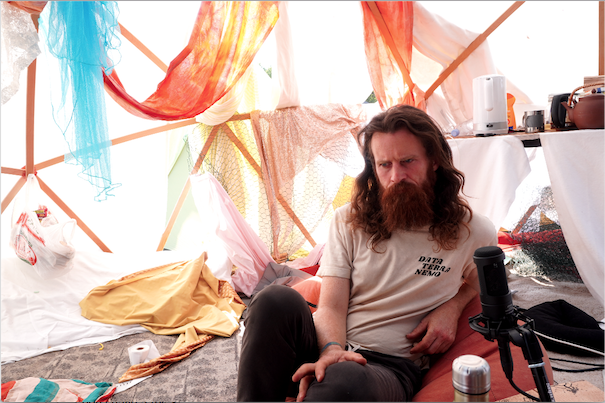 You can find a longer report of Daan's experience on SSB.

Bornhack is a 7-day outdoor camp in Denmark for hackers, makers, and people with an interest in technology. The purpose is to meet, learn, socialize and have fun. Powersource gave an introduction talk to SSB. Arj gave a more general talk on Anarchitecture that included a section on SSB.

Cblgh, Powersource, and Louilinn hosted an En Koferens (unconference) in Malmo (Sweden) on August 26th. For those not familiar with the concept, an unconference is a conference whose presentations are actually provided by attendees and selected on-the-spot during the conference. There were many talks on science, psychology, and technical topics, including a presentation on SSB.

Soapdog, through Patchfox, will now take the responsibility for Scuttleshell development, which enables multiple SSB desktop clients to run at the same time. This opens the door for running multiple SSB applications concurrently, each with specialized functions such as Calendars, Chats, etc.

Cel has been fixing issues in git-ssb-web, patchfoo, and a number of other things, as well as updating documentation. Buoyantair is also working on reorganizing, rewriting, and redesigning the documentation. Both initiatives are funded with remaining funds from the Dfinity grants we received almost two years ago. The funds are held in a collective dedicated to maintenance.

Andre has spearheaded Room Servers, a new way for clients to connect to one another. Historically, users have synchronized their updates through Pubs, which hold a mirror of the data of all the users that synchronize through them. With a large number of users, Pubs can incur significant hosting costs to their maintainers. Understandably maintainers have tended to keep them private.

Room Servers instead connect users that are online at the same time, therefore acting as a (secure) relay, but otherwise store no data. This makes them really cheap to maintain, so we expect users to spawn their own Rooms for their communities.

Support for Room Servers is already available in the latest version of Manyverse and is currently in beta trial for Patchwork.

Cinnamon spearheaded an effort to add warnings on content with sensitive topics. With the community's help, they produced a specification, which has been implemented in Patchfox, Patchwork, and Manyverse. In Patchwork, trigger warnings look like this: 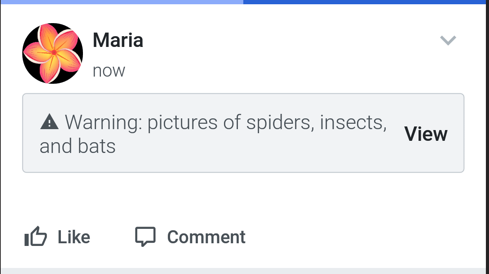 Oleksandra Lapiha has spent a summer internship at Symbolic Software and created the first comprehensive analysis of the entire suite of SSB protocols using a proof assistant. The software and a report are both available on Github. This paves the way for ensuring that the design indeed provides its intended security properties.

The $164 (USD) we received in August, in addition to money accumulated over the last months, have been used for a number things: they paid for the hosting costs ($11) of Cel's website, which also serves as a community Pub; they paid for Food in a Scuttle Party to thank volunteers ($43); they compensated Luandro for an online workshop they gave on Mesh Networking ($150); and they provided a scholarship to Cinnamon for attending Dweb Camp ($200).

We thank our backers for the $162 (net) donations we have received in September. The funds will help us support more initiatives like those presented here. While the various grants we have received in the past help us cover our maintenance costs for the next months, we are far from financial sustainability. So please spread the word around and help us reach more people!

See you next month!